The 72nd Golden Globe Awards, honoring the best in film and American television of 2014, was broadcast live from the Beverly Hilton Hotel in Beverly Hills, California on January 11, 2015, by NBC. The award show was hosted by Tina Fey and Amy Poehler for the third consecutive and final time.

All eyes were on the George Clooney as he gave a beautiful speech  when he received the Cecil B. DeMille Award for lifetime achievement. Mr. Clooney dedicated his speech to his lovely wife Amal and his final dedication was to the unity of marches in Paris and elsewhere in the world in   the wake of the Charlie Hebdo shooting. “And one last thing: To reiterate what we’ve all been talking about, today was an extraordinary day,” said Clooney. “There were millions of people who marched not just in Paris, but around the world. And they were Christians and Jews and Muslims. They were leaders of countries all over the world. And they didn’t march in protest; they marched in support of the idea that we will not walk in fear. We won’t do it. So, Je Suis Charlie. Thank you.” 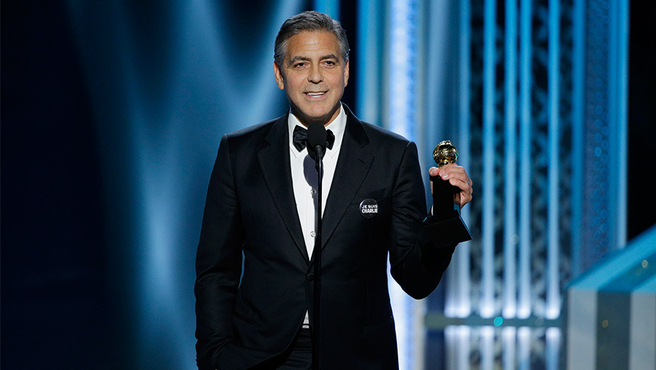 The Red Carpet was dazzling array of beautiful gowns and smart tuxedos. From classic looks to the occasional  faux-pas, most of the stars shined  with elegant and jaw dropping looks for Hollywood’s first award ceremony of the year.

Overall, the night was win-win for all involved from the Haute red carpet looks to the award ceremony itself.  Congratulations to all winners contributing to yet another successful year of the Golden Globes.